Power to the People: The Appeal of Social Media 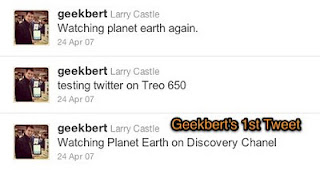 So I've been increasingly looked to in my workplace as the resident social media guru. It's true that I'm probably one of the biggest geeks in the office. It's also true that I tend to be an early adopter of social media tools. While I would never be called a prolific tweeter, my first tweet was on April 24, 2007. I tweeted 23 times that day. Needless to say, I didn't get it at that point. But then, who did? There was not much to get; it was less than a year old (invented in March '06 and launched in July). So I've been tweeting on and off for just under 5 years. Foursquare and I celebrated our 2 year anniversary this past January 5th. Who knows how long I've been on Facebook and MySpace. Wait, you may not have heard of MySpace. It was kind of like Facebook but... never mind. Actually, now with Timelines it’s easy for me to find out how long I’ve been on Facebook. Let’s see, May 19, 2007 was the day I joined Facebook. Whoa! I never realized that I’ve been on Twitter longer than Facebook. I always thought I remembered it being the other way around.

My point is, because I've always found social media fascinating, I keep up with what's going on in it. As a result, those around me who are much less aquatinted with the social media look to me for answers and direction when it comes to the topic. The truth is, I don't really like to use it as much as I like to understand how it works and how other people use it. As I was discussing some of the latest trends with an associate recently, I used an illustration that he found very helpful. In fact, he said that as a relative newcomer to the social media scene, he found the explanation somewhat comforting. We've both been tasked with strategizing ways to leverage social media for our clients and he is feeling a bit overwhelmed with trying to get a grip on the social media landscape and how one can use the plethora of services and tools out there to gain exposure.

So what's the analogy? Nothing profound really. I was making the point that social media is developing so rapidly that, as soon as you think you've grasped it, it has morphed into something slightly different. I was trying to let him know that he is not alone. I've been observing and using social media for about as long as it's been out (Mac or Palm user group bbs anyone?) and I still feel like I'm just keeping my head above water in my understanding of what tools are out there and what you can do with them. I explained that the social media user base is not like a long line with a few people and services who are at the front leading the way. It's more like a wide arch that is moving forward like a wave. If anyone says they're the expert, take it with a grain of salt. There are certainly thought and industry leaders but no one knows what the future holds. 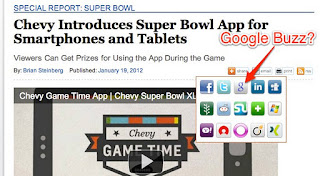 I came across a great example of this on Friday. There’s a really great app idea from Chevy that was described on AdAge.com that is designed to engage viewers in a new way and lend some insight into how they use social media during the big game. It’s really a great idea; I wish my company had come up with it. Here’s the irony: The publication that sees the value in running this story has missed the boat on the priority of keeping up in the realm of social media themselves. The share button on that story offers the big three in priority position. Just as you’d expect, there’s Facebook, then Twitter, and then Google Buzz. What? At first I was impressed that they had Google in the “right” position. then I clicked the button and got this: 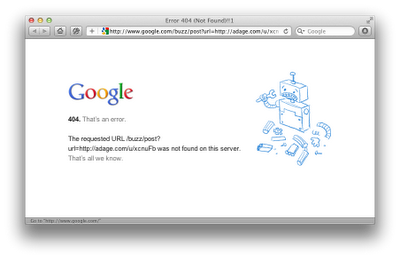 It wasn’t Google+ sharing like I expected. It was Google Buzz which no longer exists. Before I come off too self-righteous, I should hasten to say that I would not want to set up my company website as the example of cutting-edge use of social media. Not even close! I’m just noticing that even significant players in the space will find it challenging to keep up.

In fact, I’ve noticed that the larger the organization the more difficult it will be. Most of the leaders in social media are individuals and smaller, nimble companies. I think the advantage they have is more freedom and agility. There are fewer layers to go through when making decisions about how to use social media and changes in direction are far easier and less risky. It’s easier to pull a 180 on a Sea-Doo than on a Cruise Ship.

I think that’s what I find most exciting about the whole thing. I love that the weight of influence in media appears to be shifting from a few centralized powerhouses to a broad base of savvy individuals, small companies, and the consumer. It’s like the plot of every “over throw the empire” movie ever made. Who doesn’t love that?! I guess the empire probably doesn’t.

So what do you think? How do you use social media? I'd love to hear your thoughts!
Posted by Geekbert