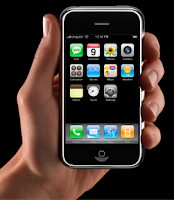 If you're one of the (few) people who are skeptical about the iPhone, you might want to reserve your skepticism, at least in writing, until you see it for yourself. This Slashdot review of the original iPod at it's debut is right up there with the story of the teacher that told Einstein to drop out of school and pick a trade. How would you like to be remembered as having said the following about the iPod when it first hit the streets back in 2001?

No wireless. Less space than a nomad. Lame.

That reminds me of some other famous...er, infamous statements:

"I think there is a world market for maybe five computers."
--Thomas Watson, chairman of IBM, 1943

"There is no reason anyone would want a computer in their home."
--Ken Olson, president, chairman and founder of Digital Equipment Corp., 1977

"This 'telephone' has too many shortcomings to be seriously considered as a means of communication. The device is inherently of no value to us."
--Western Union internal memo, 1876.

"The wireless music box has no imaginable commercial value. Who would pay for a message sent to nobody in particular?"
--David Sarnoff's associates in response to his urgings for investment in the radio in the 1920s.

"I'm just glad it'll be Clark Gable who's falling on his face and not Gary Cooper.
--Gary Cooper on his decision not to take the leading role in "Gone With The Wind."

"We don't like their sound, and guitar music is on the way out."
--Decca Recording Co. rejecting the Beatles, 1962.

"So we went to Atari and said, 'Hey, we've got this amazing thing, even built with some of your parts, and what do you think about funding us? Or we' ll give it to you. We just want to do it. Pay our salary, we'll come work for you.' And they said, 'No.' So then we went to Hewlett-Packard, and they said, 'Hey, we don't need you. You haven't got through college yet.'"
--Apple Computer Inc. founder Steve Jobs on attempts to get Atari and HP interested in his and Steve Wozniak's personal computer.

"Drill for oil? You mean drill into the ground to try and find oil? You're crazy."
--Drillers who Edwin L. Drake tried to enlist to his project to drill for oil in 1859.

"Everything that can be invented has been invented."
--Charles H. Duell, Commissioner, U.S. Office of Patents, 1899.

Thanks to SoCool.com for all the great quotes!
Posted by Geekbert

Email ThisBlogThis!Share to TwitterShare to FacebookShare to Pinterest
Posted in: gadgetry, ipod, mothership

It seems however premature to say that the iPhone will be a hit. The price unless it comes down will be a major issue to consumers who may be used to free or cheap susidized phones and even products like the Treo and BlackBerry coming down in price. Hopefully Apple has learned their lesson from the whole Rokr fiasco-it appears you can hold more than 7 songs on the iPhone. Also, since you can't "feel" the buttons there needs to be voice activation for car use.

Dave, I agree that it's premature. I still say it's gonna be a hit! By saying it now, I'll just have more to gloat about when it is. :-)