This Could Change Everything 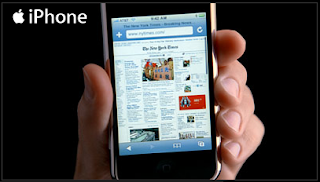 Okay, not really everything. But I do think it has the potential to change the way Americans think about their phones. Having worked for a major wireless carrier, I would say that we tend to think of wireless in terms of carriers whereas much of the rest of the world thinks in terms of device and functionality. In the US we have created this monster called the "free phone" that has really affected the sales strategies and design paths in wireless. I think that the iPhone has the potential to shake up the wireless industry in much the same way as the iPod and iTunes Store has shaken up the recording industry.

It will likely be gradual and greatly resisted by Big Wireless. Nevertheless, if just a fraction of the wireless user base in the US gets a taste of what can really be done when the carriers dial back the restrictions, and when Apple's sweet marriage of beautiful hardware and uncomplicated software reels them in, there could be a tidal wave of change that eventually sweeps away old carrier-centric paradigms and replaces them with new user-centric models. It's way more complicated than that but I can't get away from the similarities between the effects of the iPod/iTunes Store on the music industry and the potential effects of the iPhone on the wireless industry.

Anyway, if you haven't already, you should watch the new iPhone ads. They're really great. If you didn't want one already, you're gonna. Just imagine in three weeks when you can actually go to the Apple store and try one out. I'm not a prophet, but I really think this thing is going to be huge! Apple's stock went up this week, apparently just from the announcement of a hard release date.

A friend commented to me that his wife saw the commercials early this week and said, "I want that!" I have been sold since it was just an unconfirmed rumor, but I'm convinced that the world of non-geeks is just getting a glimpse of what could be an industry changing device. In about two months we'll see the beginnings. I think a year from now, we'll really have an idea of the impact (or lack thereof) made by the iPhone.
Posted by Unknown

Yipee! We own Apple stock! But probably not enough shares to cover the cost of this phone, which Brian is salivating over!

I think Apple should include a few branded cloth bibs in every iPhone package to hand out to your fiends before you show them your new iPhone. The drool is going to be flowing!