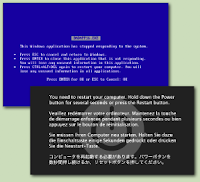 Most have heard of the infamous Windows "Blue Screen of Death." However, being a Mac User, you may not be familiar with a Kernel Panic. It is the closest thing on a Mac to the BSOD and it doesn't happen often.

I recently happened upon a screen saver by Doomlaser that simulates the OS X kernel panic screen. It might be fun to send to a friend. It even has a fake preview screen so they won't suspect a thing when the screen saver kicks in and for a few seconds they think their Mac crashed. It'll give them a twilight zone moment you will want to be sure you're there to witness.
Posted by Unknown

Email ThisBlogThis!Share to TwitterShare to FacebookShare to Pinterest
Posted in: fluff, mothership

what exactly causes a 'kernal panic' and why might
it re-occur?