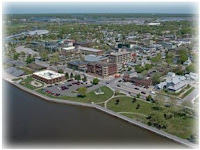 This past summer, my wife and I took the kids to a little town right on Lake Michigan called Grand Haven. What a great decision that was. It was just a day trip but what a day! We spent the afternoon at the beach which was beautiful...and surprisingly not that crowded. We must have been there on an off week or just the right time of day.

Then we decided to go a few blocks into town to get something to eat. It was the coolest town. It had all kinds of cool little shops like you'd expect in a little tourist town. There were the ones with every novel toy you could think of, the "Michigan Souvenirs" shops, the clothing stores, and several places to eat. There was also a really great surf and skate shop. While one of my daughters and I priced a new deck and hardware for her, we struck up a conversation with the owner. I told him I noticed he had a new iMac on his counter and asked him if he was using it for his POS system (you didn't think this was really just a post about my vacation did you?). He said he used it for everything but POS. He tracked inventory and all his numbers and orders on it. We geeked out for a minute and then we were on our way.

After that, I began to notice iMacs in just about every shop we entered. Even the Pizza & Sub shop we ate in had one on the front counter where you give your order. I wanted to re-read the sign we passed entering the city. Did that say Grand Haven or Mac Heaven? It was like everyone had attended a Kool-Aid convention and been converted. And the people were all so nice. The prices were all bargains. I can't think of a negative thing to say about that perfect little town. Maybe my judgment is clouded a little, but I still think you should consider visiting Mac Heaven, er-I mean Grand Haven-at least once. I think you'll find it second only to Cupertino. 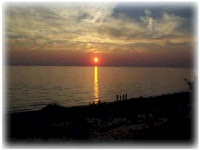 Email ThisBlogThis!Share to TwitterShare to FacebookShare to Pinterest
Posted in: culture, fluff, mothership

We love Grand Haven too! Although, I'll admit, I failed to notice all the Macs that you did.

I have very sensitive Macdar.